Badminton has gained an enormous fan base in the ancient city of Mandalay in north Myanmar - thanks to Badminton Asia and the Myanmar Badminton Federation.

For the first time in the history of the shuttle sport, an international badminton tournament is being held in Mandalay - the Badminton Asia Under-17 & Under-15 Junior Championships.

A total of 368 players competing in the championships which began on Oct 3 and will end on Sunday (Oct 7).

This is the second time the Badminton Asia Under-17 & Under-15 Junior Championships are being held in Myanmar. Last year the championships were held in the capital city of Yangon.
Huge crowds have been turning up at the Mandalar Thiri Multi-Purpose Stadium, more so when Myanmar's mixed doubles pair of Zaw Lin Htoo-Wai Wai made the quarter-finals in the mixed doubles in the Under-15 category.

The local hopefuls, although seeded second, lost to Indonesia's Muh Putra Erwiansyah-Febi Setianingrum 10-21, 14-21 for a place in the semi-finals. The lack of experience showed on the homesters.

"This is a new development for badminton in Mandalay," said Myanmar Badminton Federation president Aung Paing.

"The crowd support has been fantastic. It spells well for the development of the game in the country. The game is bound to grow, especially among the schools and grassroots."
Businessman Aung Paing is working hard to host an international badminton tournament at a higher level next year - an International Series event. 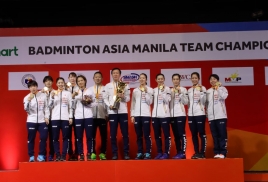 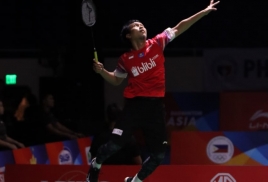